Biofiltration is a process to purify air and water biologically with the aid of micro-organisms, specifically bacteria.

What is Industrial Biofiltration?

An Industrial Biofilter is a housing that contains and encourages the growth of vast numbers of bacteria through regulated temperature, humidity and pH for the destruction of volatile organic compounds (VOC's) and odor causing compounds (including NH3, CS2, H2S), in a way that can be quantified and measured, often for compliance purposes. Industrial biofilters utilize a group of aerobic organisms that are classified as chemotropic, meaning they derive the energy needed to live and degrade compounds from the reaction itself. As a point of fact organisms that derive their required energy from sunlight are classified as phototropic. Two sub-groups of the chemotrophs are the hetero-organotrophs and auto-lithotrophs. The sub group mainly utilized in biofilters are the hetero-organotrophs which have the ability to utilize the carbon in carbon compounds (i.e. methanol) as an energy source as well as the creation of cell components. As a point of fact auto-lithotrophs gain their energy through the degradation of non-organic compounds (NH3, H2S, S2O3, etc..). 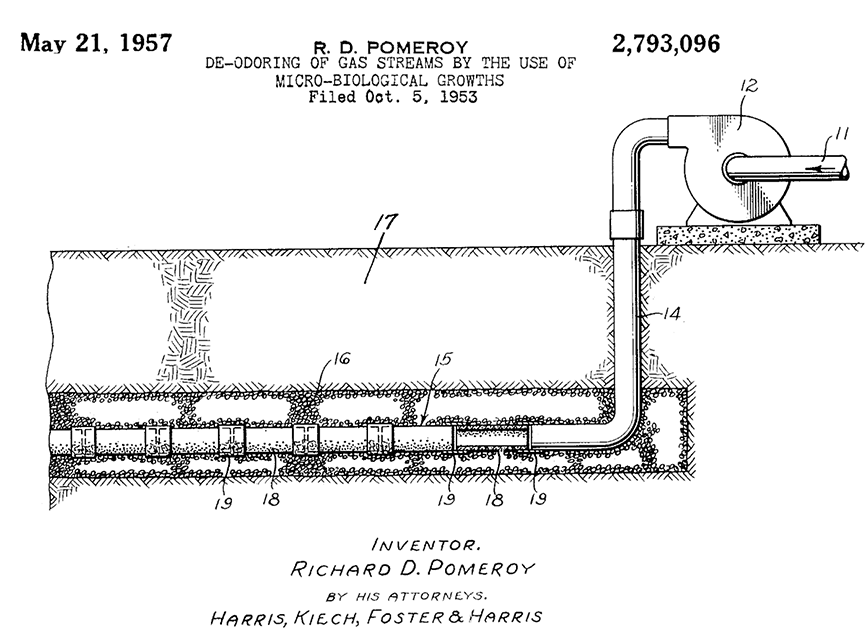 What is the history of Industrial Biofiltration?

One of the earliest known uses of biofiltration in the Industrial Era was in World War I (1914 to 1918). Stagnant air was sucked out of tunnels and trenches, blown through earth where it would permeate and re-enter the tunnels and trenches. The air would be "cleaned" through the actions of bacteria naturally present in the soil. In 1923 the concept of treating off gases from sewage treatment plants was developed. In 1953 R.D. Pomeroy received a patent (#2,793,096) for "De-Odoring of Gas Streams by the use of Microbiological Growths" that arose out of a successful commercial application in California.

A high pressure blower (#12) is used to pull polluted gases (#11) through a pipe and inject it into a vertical header (#14) before it turns and becomes a horizontal header (#15) buried under a biologically active medium (#17) that is suspended above the header by a layer of permeable medium (#16) such as gravel or aggregate. The header is composed of perforated sections (#18) and non-perforated sections and couplings (#19). The basic design developed then is still used in many commercial applications today with the exception that the medium, or media, has changed. Since that patent, the major innovations in biofiltration have been in two areas: bacteria enhancement and media development.